The curve of the globe or the lack of it, is a constant source of conjecture between the Ball and Plane gang. All the U Tube clips claiming to prove one way or another are a waste of time. Modern technology in the form of laser lights, cameras with fantastic zoom capabilities and high-powered telescopes only add to the confusion.

There are many points worthy of consideration and investigation regarding the shape of the earth but curvature or the lack of it is not one of them; at least not the way it is currently presented. Probably the favourite proof of the Ballers is that ships disappear over the horizon starting at about 3 miles, hull first. This is debunked by the Planers as a proof, by the fact that a ship that has supposedly disappeared over the horizon can be brought back into view with a telescope or camera zoom. Given that Galileo discovered the telescope in the sixteenth century, it is surprising how long this proof has persisted. Mariners over the ages must surely have been familiar with this. At this point the Ballers will introduce refraction to muddy the waters while the Planers will give us a first-year art student lesson in perspective and vanishing point.

The favourite proof of the Planers is that items that should have disappeared under the curvature are still visible, thus proving no curvature and a flat earth. This is like the hasty conclusion reached after Magellan supposedly circumnavigated the earth. The items include boats, ships, light houses and mountains both big and small. Usually the argument is accompanied with a diagram, showing a ball earth of approximately 4,000 miles in radius and a tangent line of sight from the top projecting into space. Underneath, at various increasing distances, a line is dropped from the horizontal line of sight to the centre of the globe and where it crosses the circumference represents the drop due to curvature.

The mathematics of curvature is based on Pythagorean geometry and both camps agree on 8 inches per mile squared of distance travelled to give the curvature; usually converted to feet. The accompanying link demonstrates the figures.

This looks fine and visually indicates that the curvature or its effect, should be seen if the earth is a globe.

There is a huge problem with the model diagram. It is not to scale for both items it represents, thus giving a false impression of the simplicity of curvature. The globe radius is in miles as well as the distance travelled. The curvature is in feet. It is only when you convert all distances to feet that the enormity and subtilty of the problem becomes evident.

Another problem with the model is all observations are at sea level; no allowance for observer height, which is typically 6 feet or higher. The distance travelled is also incorrect; it should be the arc length not the tangent length.

The following U Tube clips are the best and most accurate examples of the mathematics, geometry and trigonometry involved in calculating curvature and hidden height. Most of us would have learnt this at secondary school. It will reawaken rusty brains.

The next clip shows how Excel is used to generate a curve calculator, knowing just observer height and distance travelled around the arc.

This is a bit tedious so here is an online curve calculator, using the same science. Just plug in the required values.

We are now armed with the necessary tools to go out into a real world live situation and use our sense of sight to prove or disprove the model. No need to go to outer space. If our observations back up the model, then the earth is probably a globe of the stated shape and proportions. If not, then maybe the shape and/or proportions are not as believed to be.

Before proceeding to my live local situation, a few ideas on our wonderful gift of sight.

Light travels in straight lines unless refracted. It will be refracted travelling through different mediums, due to its varying speed in the different mediums. We would all be familiar with the pencil in the glass of water. It can also be refracted in the same medium due to temperature inversions. As this is slight when all our observations are in air, we will not deal with refraction, initially.

How far can we see? The sun is supposedly 93 million miles away. We can see it at the horizon, both at sunrise and sunset. We can see it high in the sky. So, we can see a long way.

When it comes to seeing things on earth it appears more complicated. We are restricted to three miles at the horizon, at low heights. Clearly the water or land and sky do no meet. They just appear to. Put a building or mountain in the field of view and thing get more complicated.

Here in Australia, why can’t we see the tallest mountain on earth; Mount Everest of 29,000 feet? Because it’s too far away and/or it has disappeared under the curve of the earth. Both answers could be correct. Play around with the curve calculator and it is revealed that at 211 miles, Mount Everest will be below 29,000 feet of curvature at an observer height of 6 feet, assuming nothing else is in the way. At 1,000 feet the distance will have increased to 250 miles.

Let’s agree on something. From due North we can’t see something at due East on our ball model, because its 6,000 km around the arc and obscured by the bulge or curve of the earth; draw the chord line.

If we progressively get closer to due north the observable curve gets more difficult to see, even going to a more sensitive scale. We have to rely on the calculations. There is curvature and its effects should be observable in the hidden heights of distant objects.

So, to my local situation. I live in Melbourne, Australia’s second largest city of 4.5 million people. Melbourne is the capital of the southern state of Victoria. Melbourne is located at the northern end of a large bay called Port Phillip Bay. The southern end of the bay enters the ocean of Bass Straight at a narrow opening called Port Phillip Heads. Thus, the bay is tidal. It is four times the area of Sydney Harbour, measuring 30 miles wide east to west and 40 miles long north to south; a body of water large enough to demonstrate the effects of curvature.

I live in a bayside suburb called Mordialloc on the eastern side of the bay. I have a clear view of 30 miles across to the western side of the bay. 5 miles further inland across flat land rises a modest mountain range called the You Yangs. They are thought to be the tail of the Great Dividing Range which run down the Australian east coast. There are three peaks the tallest being 1,047 feet.

Here is a link showing the path across the bay and the distance.

Just type in: Mordialloc pier and Station Peak You Yangs.

As you can see the distance is 36 miles.

Here is a link showing the height.

On a rainy, cloudy, overcast smoggy day you cannot see the You Yangs from Mordialloc pier. Have they disappeared under the curve? Not so fast!

Fifty-eight years ago, I swam at Mordialloc pier as an early teenager. I remember seeing the You Yangs on a sunny clear day. I didn’t give it a second thought. I had no idea how far away they were or how much of them I could see. They were just in the distance. As for using them to study earth’s curvature; remember I, along with everybody else, had been taught the earth was a Globe, spinning and tilted on its axis, travelling around the sun.

So how much of them can we or should we be able to see?

Globers will tell you at best you can only see the top half. Planers will say, you can see almost all with a little bit of distortion at the base. Play around with the curve calculator. You decide how much you should see.

Clearly, we need some optical assistance. I have looked through binoculars with 10x zoom. Suffice to say I am encouraged to get photographic evidence with a Nikon Coolpix P900 camera with 83x optical zoom.

Before revealing the photographic evidence, there is another piece of disturbing information. In the narrow 5 km strip of flat land between the bay and the You Yangs, there is a major highway connecting Melbourne with Geelong, Victoria’s second largest city. Thousands of cars and trucks use this road, night and day. It is well lit with lights atop 100-foot poles.

When the sun goes down, you can’t see the You Yangs. What you can see, from 30 miles away on Mordialloc pier are the lights illuminating the highway.

They should be hidden under 500 feet of curvature.

Bet you can’t wait to see the photographic evidence! 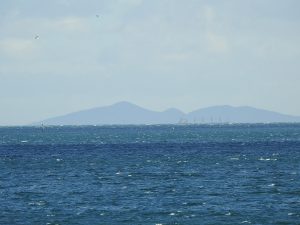 This image was taken with a Nikon P900 Coolpix camera, 83x optical zoom, from Mordialloc pier, observation height of 13 feet, across Port Philip Bay to the You Yangs, a distance of 36 miles. The cargo ship, channel marker and birds are over 25 miles away. The tallest peak is 1,047 feet. The small peak in the middle is 750 feet.

The curve calculator calculates that we should not see the bottom 665 feet. What do you see? The image has not been adjusted in any way.

The current earth model is not supported with the observed hidden heights of distant structures, be they buildings, boats, lighthouses or hills and mountains.

The model is either wrong in shape and/or in dimensions. For example, a vastly larger earth would not display curvature over similar distances.